Windsor Junction Anglicans worshipped from 1900 in the Temperance Hall. In 1916, due the generosity, in the main, of a Mrs Uniacke, they were able to buy a disused church from Bridgeville NS and have it carted to Windsor Junction.

It was named St Stephens In a very short time, only 5 years, they had outgrown this building and they began to save to build a bigger one.

Things went well, and by 1933 they had enough to build the present building. Numbers continued to grow and within a few years they were using every inch of the building, including the unfinished basement for a Sunday School.

Eventually a new Parish was formed which included St John’s in Waverley, St Margaret of Scotland in Oakfield and St Stephen’s.

By the 1980’s it was decided to merge St Stephen’s and St John’s and build a new church on the site of the of St Thomas Anglican church on Highway #2, (which had long since been removed to the Fall River Cemetery and later to become a store shed on Lake Thomas), and the two church buildings were deconsecrated.

Waverley’s Church became a museum.  The choir stalls, pulpit, lectern, altar and woodwork behind the altar were all incorporated into the new building, where they can now be seen.

Twenty years ago, when the decision was made to close St Stephen’s at Windsor Junction and St John’s in Waverley and open our new church, there was much discussion about what things from what church would go into the new one. Good choices were made, and the effect is beautiful.

The debate about the two bells was interesting, and is clouded with mystery. St Stephen’s and St John’s both had Railway bells, taken from steam trains. We know that St Stephen’s, in 1922, paid CN $2 for the bell, and that CN charged tham $3 to deliver it from Halifax to Windsor Junction!

The decision was made that St Stephen’s bell would come to the new church. It was taken by a parishioner to clean, and there was a fire in that person’s shed and the bell was, it was alleged at the time, destroyed.

There was, therefore, only one bell left. This bell, at St John’s had been sold, with the building, to the Waverly Village Society who were to use the old church as a Village Office and Museum. So, the long and the short was that there was no bell for the new church.

This was the case for almost 20 years. One day some of our volunteers were clearing out the Janitor’s room and they discovered a bell! This had recently arrived, the room is small, and had been totally emptied a few months before for some new water treatment equipment. Many can attest, including your writer, that this was, at that time, a bell-free zone!

How had this bell appeared? Who had been hoarding it? Which bell was it? Had St Stephen’s bell really been destroyed?

The first port of call ws obvious – visit St John’s. From the belfry, which is closed off, hangs the bell rope. Annie Smith, whose love all these years has been the development of the museum, is certain that the bell is still there. However a tug on the rope suggests otherwise!

From the mists of time comes an account of nefarious actions in the night, and a suggestion is made that a group of bell-rustlers from St Thomas purloined the bell in the middle of the night and hid it away somewhere, where it langoured for almost 20 years.

Can this story be true? Knowing smiles on the faces of some of those who might have been involved suggest that it might! How they removed this incredibly heavy bell remains a mystery. Where was it hidden? Who smuggled it back into St Thomas’s and hid it?

The bottom line is that we had possesion of a bell which legally was not ours, but the Waverly Village Society, who always thought they had a bell were happy to cede ownership to St Thomas’ and a group of our volunteers spent countless hours cleaning it up.

It was rededicated last year by Bishop Ron, and is now proudly installed outside the church for all to see, and for the bell to sound for worship as in fomer times. 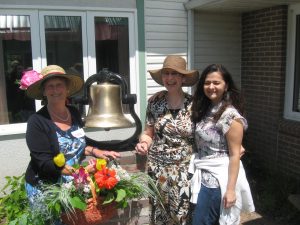